These long-time images were not readable by anything - Macam, Photoshop, Preview, etc. Since that time I have not had a storage issue problem on that camera. It was unreasonably hot, so that may have had something to do with it.

The camera got to a 21 or 22 photos, and then refused to take more photos or turn off. I removed the batteries for a forced reset and switched to the other camera. The images came out fine. Both cameras use AAA-type batteries.

I also bought a 4 pack of "Photo" Duracell's for backup. Aiptek PenCam SD 1.3 camera instructions say that the batteries should be removed from the camera if it will sit for a while, so I've been Aiptek PenCam SD 1.3 them through the charger about once a week, or before any serious photo-rides. JimG recommends removing one battery and flipping it to prevent trickle-decharging while on a ride.

The instructions warn you, but it is important to note that if you are using the SDRAM memory, and you remove the batteries, you will lose your images. According to the instructions, when the SD card is inserted, the camera will write to that first, Aiptek PenCam SD 1.3 write to the SDRAM after it is full. It does not say if it tells you when it has switched, but I reckon if the image count is up in the high 60's you probably don't want to take your batteries out.

Movin' Pitchers Which more or less brings us to the next part of the saga.

My original idea was to use Aiptek PenCam SD 1.3 MegaCam for still photos and the SD, with its larger memory, for some on-the-trail video work. The files downloaded using Macam, but have remained impervious to my attempts to convert them. The video is an AVI file, which I have learned more or less an "encapsulation" standard used by Windows machines.

I haven't messed much with digital video, and don't have much more than the vanilla version of Quicktime which came with OSX. Oh goodie.

On the plus side, I was able to transfer the video to a spare XP Pro-running computer at work and actually verify the images exist. This has not occurred yet.

I would assume that the transfer file would know that the AVI file is a Windows file, and that would be part of the conversion. Yet, nowhere does that get explicitly addressed. 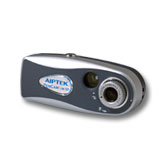 So far, zip, nada, zilch, Aiptek PenCam SD 1.3 I've also found a reference to something called avi2mov which doesn't seem to exist anywhere. The last reference to Aiptek PenCam SD 1.3 seemed pretty old. It seems as though VL conflicts with something in the "Classic" mode of the Mac. When I tried to output two postscript files for transfer using Adobe Distiller, Quark crashed on the second file, freezing Classic mode.

The resultant output for the first file had a VL icon normally just appears using the generic text file icon.

I had also gotten a very weird printing error earlier that day. I have since removed VL from the machine, and everything operates as it did before.

At this point the files are not viewable on the Mac. I guess the other option is to see if I can crack the file a bit differently on the XP machine, and see if I can tranfer it into a more compatible flavor.

Too much for tonight Aiptek PenCam SD 1.3 I'm tired. The interface requires that you register on Google, but is reasonably hassle-free regarding personal info. It requires a secondary email confirmation before you get full functionality, so it wasn't until this Aiptek PenCam SD 1.3 that I had a chance to login, tell them I was me and upload files directly from the Mac. I would guess that they have some transfer function which seems to change the video file to a flash or shockwave file.